TrxAVR is a PCB containing an Atmel ATmega2560 processor, a 24LC512 EEPROM and USB, serial, display and other interfaces.
At this time of writing (May 2009:

TrxAVR-Picastar is a Picastar HF transceiver where the original PIC16F876 controller is replaced by a
TrxAVR controller driving a graphics display panel or a 40x2 or 20x4 character display.
The TrxAVR board directly drives Picastar DDS, DSP and diode logic boards.
TrxAVR communicates via USB with it's companion Hobcat program on a Windows PC.
A dedicated RS232 port at 38400 baud provides a CAT interface.
Hobcat provides configuration, loader (ie: DSP code and params), SWR meter calibration.
Its has a DSP monitor window and a DDS (CAT control) window.

The interconnection drawing gives a good overview of the projects hardware integration.

HobcatSetup.exe is a 'Wise' installer that does the following:

Atmel ATmega2560 microcontroller
This is 16mhz 100pin surface-mounting microprocessor.
Some key features are:

Please note: the schematic doesn't make it clear which I/O lines should have decoupling capacitors.
This omission will be addressed soon. The above image is misleading is this respect as it is from earlier in development.

Layout drawings are in a subfolder of C:\program files\hbradios\hobcat if you download and run hobcatsetup.exe.

The layout of TrxAVR-A is designed for home construction of the PCB (large vias which are not used for component pins).
I/O connections from the processor in the centre of the board radiate out to 0.1 inch connectors with very few crossovers.
The connections are grouped with port and function allocation according to the needs of a Picastar or other HF transceiver.
The schematic is labeled accordingly, and labeling corresponds to the operation of the TrxAVR-Picastar software.
(Pin function can of course be changed with other software.)

TrxAVR's specific provisions include the following:

This is a separate PCB containing a further ATmega2560 microcontroller chip
It connects to up to eight low resolution rotary encoders.
Its output is a 0/5V serial data stream with a short data messages for each encoder movement.
The messages are of the form $3+01. This particular message means encoder 3 increment by one.

Encoders8 is an option to TrxAVR-Picastar. It provides for eight rotary encoders, each of which can be menu-assigned to control a DSP parameter. 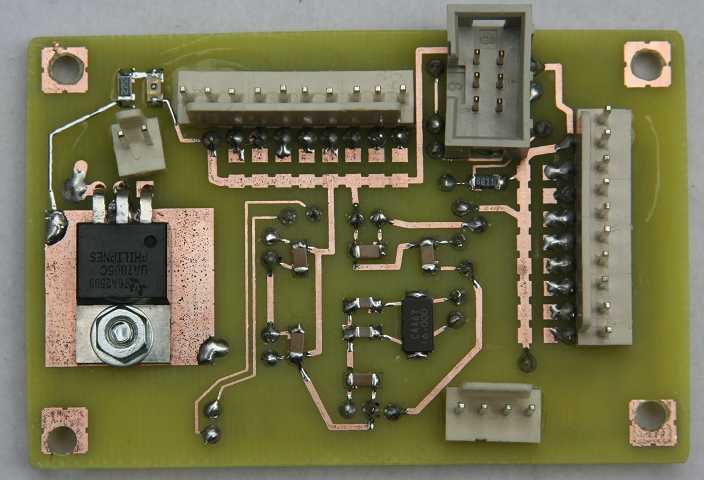 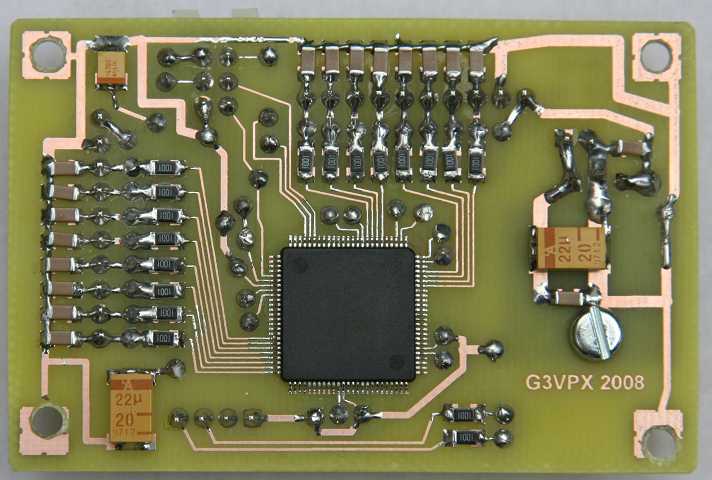 TrxAVR-B is a commercially manufactured PCB that combines TrxAVR and Encoders8.
Its dimensions are 80 x 68mm.
It is a very compact board and so not suitable for home etching of the PCB.
It was designed specifically to work with the single board Picastar of Glenn Percy, VK3PE.
It has IDC ribbon cable connectors that match the PicNmix and other connectors of the single board Picastar.
Chris Stake did the board layout and Glenn had a small number of the boards manufactured.

End of May 2009:
- Chris has a working TrxAVR-B.
- Glenn has his Combo single board Picastar on-the-air controlled by TrxAVR-B with a 20x4 character LCD display.
http://www.carnut.info/singleboard/TrxAVR/vk3pe/TrxAVR_vk3pe.htm

120 of these PBC set have been ordered and delivered.

August 2009
Ian G3VPX and Gerard VK3CG have working 480x272 colour TFT displays
Gerard is now on board as another programmer. Ian doesn't feel so lonely with this task !!
(Chris Stake has also done some programming work)

November 2009
The new TftAVR project uses an Epson S1D13781 controller with an Atmel ATxmega128
processor to drive a low cost TFT colour panel.
Glenn, Chris and Geratd have developed this I2C driven display as a direct replacement
for the expensive EA TFT colour display. Gerard has done a mgnificant job on the
programming. Design for a production board is underway.